In the development of software that requires advanced math, statistics, or analytics, there is often a disconnect early in the development process. This occurs at the transition from algorithm selection and testing to the beginning of coding in the actual compiled language. We refer to this as the prototype to production transition.

To address these issues during prototype to production, we are presenting a method to run IMSL Numerical Libraries routines in R or Matlab. The goal is not to replace the algorithm developer’s tool of choice but to run a compiled version of the code in parallel. Pitfalls can be caught early, and data discrepancies can be resolved quickly by running the script version and compiled version side by side.

In this paper, we describe how to call IMSL routines directly from R and Matlab. In general, use of IMSL reduces software production time and costs. Moreover, the technique we describe streamlines the process further by easing the transition from algorithm development to production code. We show how to integrate IMSL with common tools used by applied mathematicians, data scientists, and advanced algorithm groups. 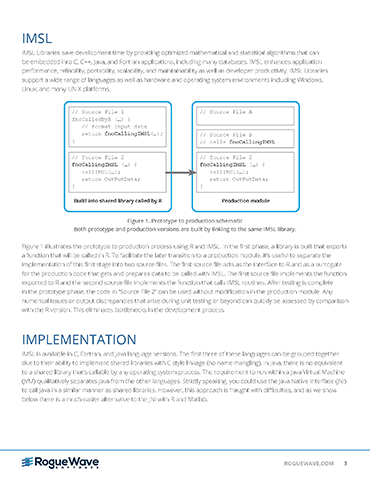 Mathematical and statistical power you need when results matter

A use case discussion on solving the transportation problem

A use case discussion on forecasting stock market volatility